“Happy wife, happy life!” is a common piece of advice every man is given when he gets into a relationship or marriage, but how exactly do you achieve this if you’re already in an unhappy relationship? While I endorse treating your woman like a queen, sometimes that’s just not enough for some women. In this post, we’ve listed some of the possible reasons why your relationship or marriage can be described as “rocky.”

Why Women Complain About an Unhappy Relationship

The more I coach, the more I run into situations where many women will complain about all that’s wrong with their men but are completely oblivious to his frustrations with her. Well, I’ve narrowed down a few common concerns, five to be exact, that I hear from good men whose women are just about to push them over the edge.

I hope you’ll read this with an open heart and not a defensive one. If it doesn’t apply to you, then great; but if it does, open up the lines of communication with your man and improve it!

One of the most frustrating things for a man is when he is absolutely trying everything he can to make you happy, yet you always seem to find the next thing he isn’t doing perfectly.

Just because your man doesn’t do things the way YOU want him to do, it doesn’t mean he’s wrong, and it doesn’t give you permission to complain about everything. Extend a “thank you” rather than a turned up nose and side eye.

Your Attitude Is Terrible 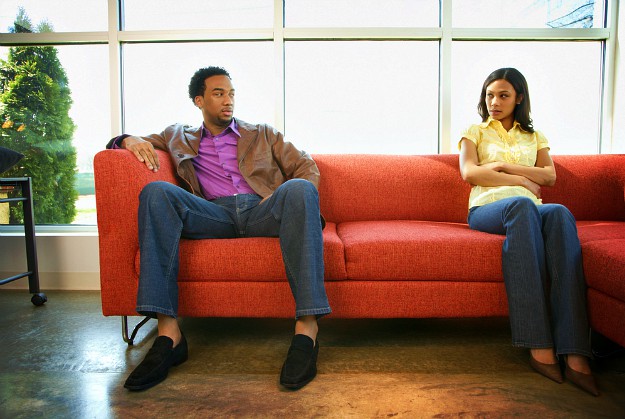 Yeah, I’m sure many will say, “Well, I only have an attitude because he….” As true as that is sometimes, many times actually, the attitude problem has nothing to do with him and everything to do with you or everyone else.

Maybe you’re mad at your friends or family, work is stressing you out, or the kids are getting on your nerves. Yet, for some reason, you lash out at him. He may take it most times, but at some point, it will get really old and he won’t want to be around you.

You Talk to and Treat Him Like a Child

A fundamental need for a man is respect. When you speak to him as if he is a child, it’s the fastest way to raise his defenses and cause him to shut down. Maybe you have kids and are used to speaking down to them, but when you start speaking to your man in a condescending tone, you need to check yourself because it’s both disrespectful and ineffective.

He won’t appreciate it, and there’s nothing sexy about it. Have adult conversations with your husband when you have issues with him, but yelling, screaming, or being condescending simply won’t serve a greater purpose in your relationship.

Additionally, stop patronizing and scolding him about chores and household issues as if he is your eight-year-old. If you need assistance, ask for what you need; scolding a grown man and showing him a lack of respect will only cause conflict.

You Keep Bringing Up the Past

You said you forgave him, you said you were over the situation. Yet every time there’s a disagreement, the same issue seems to come right back up. Instead of addressing the issue at hand, you bring up the issues from the past and try to make them a part of the issue of the present.

You use words like “ALWAYS” or “EVERY TIME”, and although you know it’s not true, you know it’s a way to demean what he actually does do, so you push his buttons. That’s not fighting fair, and he’ll get tired of it sooner than you think.

You Don’t Make Time for Him So you have time to be on every committee at church and in all your organizations — you’re a supermom and a superwoman at your job. Yet, the person that gets the leftovers of your time is your husband.

You spread yourself so thin you have no energy to be affectionate to him. When he attempts to be intimate with you, you simply blow it off or have a “headache.” Yup, I can hear the ladies once again saying, “Well, he should just…”

What You Can Do Better to Avoid an Unhappy Relationship

I encourage you to reflect and see if there’s anything YOU can be doing better to have the time and energy for him. Make him a priority. He may not say much because he doesn’t want to come off as ‘needy,’ but trust and believe he’s getting tired of playing second, third, or fourth fiddle to everything else in your life.

For those who read my blogs consistently, you know I give many tips for men on how to treat their women better, but this one just isn’t one of them!

What’s a healthy relationship and how can you tell if you’re in one? Check out this video from Iyanla Vanzant to learn more:

If you want something similar I wrote for men, here you go. I hope this might serve as a gut check for some ladies out there and, as a result, they may find themselves communicating a little more with their man about some of these possible issues in an unhappy relationship.

BMWK Family, get involved in the conversation: what are some things in an unhappy relationship that your mate may be doing that bothers you yet they aren’t even aware of it?

Up Next: 10 Ways To Survive In Your Marriage When Your In-Laws Hate You

Editor’s Note: This article was originally published on August 11, 2015. It has been updated for quality and relevancy.

Troy Spry a Certified Life, Dating, and Relationship Coach and the one and only "Reality Expert", resides in Charlotte, NC. He created his blog, Xklusive Thoughts, with the intent of putting out a very realistic perspective and using it as a vehicle for inspiration! He hopes to challenge people to think differently and inspire people to do and be better in relationships and in life!