Have you ever been with a man for a while (let’s say 6 months) and he was clearly enjoying your company, but he never defined the relationship? You wanted to know– “where is this going?”– but you silenced your voice because you didn’t want to pressure him. You’re not sure how to have “the Talk,” but the question remains, you’re all in, is he?

Or, maybe he told you in the beginning that he could see marriage and a family in his future, but when you did have “The Talk” with him about commitment, he seemed surprised because he thought you were fine with the way things are right now? This has you wondering because you’re all in but is he?

What started out as a promising future ended up in heartache and confusion. Did you miss the signs? Was he lying to you about his intentions? Should you have just waited for him to bring it up? 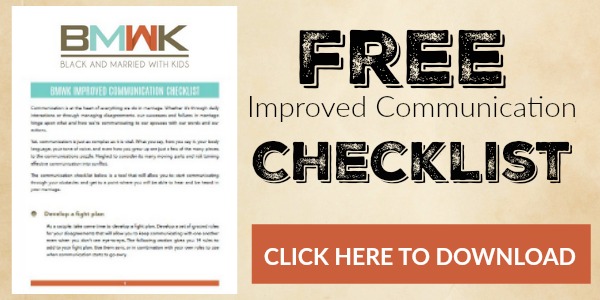 If you’ve ever been in this situation, and you’re wondering whether he’s all in, I need you to turn off that new Cardi B album and pay attention, because we need to have a conversation about the mistakes you’re making when you have “The Talk” with a man about commitment.

The Talk Mistake #1: Waiting for one big talk to tell him your intentions

The biggest mistake I’ve personally seen powerful, strong, successful sisters make is waiting for one special moment to bring up your desires for a monogamous relationship. This is a mistake because you can waste precious time and you give him all the power to define the relationship. You also put a lot of pressure on him to give you the right answer (yes, I can see myself marrying you) when he still might not be sure about what the future holds. You want to know if he’s all in not scare him into opting out.

Instead of putting so much pressure on one big talk, you should have several conversations with him about your views on exclusivity, commitment, marriage, children and the lifestyle you’d like to have with your future partner. The goal is to create a safe space for you both to express your worldview on relationships so you can see if you’re aligned with each other.

The Talk Mistake #2: Dropping the “M” word too soon

It’s the first date. Your fertility clock is ticking and you just got back on the dating scene after a heart-wrenching breakup. You were together with your ex for 2 and half years and you thought you were headed to the altar with him. Instead, he flipped the script and decided he just wasn’t ready. You vowed you’d never waste your time again, so you decide to ask on every first date if the man is serious about marriage.

HOW TO LEARN BETTER COMMUNICATION:

Learn how to improve your communication almost immediately and reduce the amount of unnecessary arguments and issues that come up so easily because of saying the wrong words or sending the wrong messages with our Effective Communication Online Training System. On sale now!

Girl, telling a man that you want to be married in the next 12 months is the fastest way to scare him off even if he’s marriage-minded and looking for a wife. He doesn’t know much about you yet, so he wouldn’t want to tell you his plans for the future because he doesn’t want you to assume he means he’s going to marry you!

Instead of interviewing men about their intentions with you (he just asked you out for ice cream, how can he know if he wants to give you a ring!), get them to tell you what their purpose for dating is right now, why their last relationship ended, and what their desires are for their future in general.

The Talk Mistake #3: Misinterpreting his answers to your questions

I read a story of a woman who’d been dating a guy for 6 months. After a great dinner at Ruth’s Chris, they went back to his place to watch a movie. She cuddled up with him but noticed his body language seemed a little stiff. Her mind started racing: “He did seem quiet at dinner… he’s been busier at work and hasn’t been calling me as much. Is he changing his mind about us?”

All of a sudden, he looked at her and said: “I need some space.”

She assumed the relationship was over, and was ready to just get up and leave, but something told her to ask him why he wanted to break up when things seemed to be going so well. He frowned, scratched his head, and told her: “I just needed more room on the couch. Could you scoot over?” This woman was about to walk out on a good relationship because she assumed the worst!

Improve Your Communication With This Free Checklist

You make similar assumptions whenever you have talked with a man about his relationship intentions but you don’t ask him what he means by what he says. For example, one of my clients huffed that the guy she was dating didn’t want marriage simply because when she asked him about having kids, he told her “I want to have a partner if I ever have children. Parenting is too hard to do alone.” She assumed his use of the word “partner” meant he didn’t believe in marriage, so she stopped seeing him. All she had to do was ask!

Don’t let your fear of wasting time with the wrong men cause you to make these costly mistakes when you have the talk with a man about where you stand in the relationship. Take the pressure off of yourself (and him) so you can have a clear conversation to see if you’re both on the same page.

BMWK ladies, what is your timeline for getting to commitment? How long are you willing to wait?

Dr. Aesha is a matchmaker, dating coach, speaker and author of the book, Can I Help A Sister Out: How To Meet & Marry The Man of Your Dreams. After years of making painful dating mistakes, she met & married her husband in 11 short months and has made it her mission to help women and men find and keep the love of their lives.