Remember #ForeverDuncan? Last month, the Internet fell in love with the courageous proposal and same day wedding ceremony for Alfred and Sherrell Duncan. The video of the surprise ceremony captivated social media for weeks, and the couple became an overnight phenomenon.

So now that the dust has settled, we wanted to catch up to see how the Duncans were adjusting to newlywed life after instant Internet stardom. And we were pleased to hear the couple is as happy in love as they look on their film. But what we were surprised to discover is that the Duncans are actually a blended family.

As many of you know, blending a family can be a lot of work—even if you have months to work on it during the engagement. So we chatted with the Duncans to see how they prepared their blended family for the next stage of their relationship.

The Duncans are now a blended family, composed of wife Sherrell (a personal trainer and motivational speaker), husband Alfred (the lead vocalist of a D.C. go-go band Mambo Sauce and member of the Blue Soldier Reggae band) his 12-year-old son from a prior relationship and her 5-year-old daughter (both children from prior relationships).

“One of the things that we had to learn is to listen to one another about certain things with our children,” Sherrell says. “I also know that if you are in this relationship and it’s serious, the other person has to care about the child—they have to care about their well-being, things like that. “

I'm so proud of my husband for EXECUTING his vision so effortlessly. To me it seemed effortless because he had EVERYTHING I would have dreamed of and more for me and I didn't have to worry about a thing. I keep looking at him as if I'm dreaming. I'm sooooo happy that he now knows that there are NO LIMITS to what he can do! His mental limitations of his potential is slowly but surely becoming nonexistent. I pray for his confidence of pursuing his dreams to become bigger everyday. I pray for him to be fearless and BOLD. This wedding showed how HARD God goes when you pray and fight! I'm so excited for my husband's evolution!!! LISTEN #GodIsSoBawse #WatchHowGodUseUS #ForeverDuncan #HappySundayFunday [email protected]

Sherrell says when you know your spouse has a genuine love for your child, then you should be more willing to respect and trust their parental input when it comes to your child.

“So when they say things about, ‘I think we should change this, change this routine or change that,’ the spouse should listen or at least take it into consideration because sometimes a person, like I said, will see something in your child that you don’t see,” she says.

Also Sherrell says they invested time in trying to bond with fun and unusual activities, such as talent shows, bike rides, etc.

“I was very adamant on us creating a bond with each other’s children,” says Alfred. “I think it’s very important that I create a bond with her daughter outside of her. I don’t want her to feel like she’s dealing with me because of her mother. I want her daughter to know that I love her and that I would do anything for her. Now, she’s a part of the family. I love her outside of her mother.”

He says the same applies with his son and his wife. He adds, “you just create individual bonds where the other isn’t in between. Then that child really knows that this person really loves me and this person really has my best interests at heart.”

They admit the process of blending a family isn’t always easy, but they want other couples and stepparents to know it’s wonderful when you finally get it to work.

“You have to have a lot of patience because kids are used to a certain thing, and adults are used to a certain thing, and then when you blend that together, it’s just not the same thing you normally would do,” says Sherrell. “You have to figure out ways to make it work and how to make it better. Not perfect, but make it better, because you can never be a perfect parent.”

AT THIS VERY MOMENT THEY ARE DRIVING US CRAZY. THEY ARE ANNOYING THE HECK OUT OF EACH OTHER AND IT'S SPILLING OVER TO US. However, this picture makes my heart feel so good!!! #TheGiftOfGabbs #BlakeyBlake #ForeverDuncan #BlendedFamiliesROCK [email protected]_mayhem

But sometimes the hard part isn’t just unifying the stepparents with the stepchildren. Sometimes, getting the children to adjust to their new step-siblings can be an ever bigger challenge. For the Duncans, the seven-year age difference between the two children might sound like a hurdle, but they admit they were fortunate that their children were instantly attached.

“My daughter has been asking me, “When is he going to marry you, Mommy? What are you going to wear,” Sherrell says with a laugh. “She didn’t know any more about the wedding [than I did]. We’ve always been family, but the moment that it was official that we were husband and wife and they were stepbrother and stepsister, she has been annoying him so badly. She was like, ‘Listen. This is what you’re going to get’…They have such a great bond.”

But in the end, the couple credits the success of their unit to their investment in another relationship—their relationship with God.

“Seek God first, ultimately,” Alfred says about their family motto. “God has had his hand on this union from day one, from 2005 and on. It is just amazing everything that has transpired within that time…I think it’s amazing.”

BMWK, what were your biggest hurdles with mending your blended family? 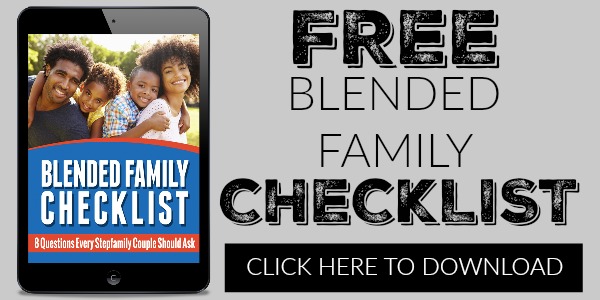