A guy who doesn’t allow his relationships to go deeper may have commitment issues. Okay… maybe I’m being a little naïve here, but when a man is at a point in his life where he is looking for a mate, he isn’t on the dating scene looking for “friends.” I know, I know…your mate should be like your best friend and all of that, but most women and men of a certain age aren’t seeking out more friends, they are seeking out lovers. Check out the commitment issues signs you should watch out for below.

What a Guy with Commitment Issues Really Means

When a guy sees that woman walking across the room that catches his attention he isn’t saying in his mind “Dang, she looks like she could be a really good friend.”

Now I do know that the bond of friendship can be developed by getting to know one another. However, if you’ve been dating someone with commitment issues and he keeps saying “I just want to be friends,” then this might be what he is really saying.

1. I Want the Benefits of the Relationship Without the Commitment

A lot of ladies end up confused and on an emotional rollercoaster when they are dating a guy and he is doing or saying all of the things that indicate he wants a relationship, but he really doesn’t. You talk all the time, go out on dates, spend lots of time together, are intimate, you kiss, hug, and probably even have sex, but for some reason, you still don’t know where you stand.

You decide to ask and he says y’all are “just friends.” For him, he is virtually getting a relationship just without the actual commitment part. The question you have to ask yourself is are you okay with that and do you do these types of things with people who you classify as your “friends?” These are all commitment issues signs that you should be wary of.

2. I Still Want to Keep My Options Open

Many times, when a guy keeps putting you in the “friend zone,” it’s because he still wants the freedom to be able to date other people. While he may like you, maybe he just doesn’t like you enough to close off all of his options to other women. Maybe for him, the risk of being tied down doesn’t outweigh the benefits of committing to you fully.

READ: Fellas: The 10 Biggest Dating Mistakes That Will Get You “Friendzoned” with a Quickness 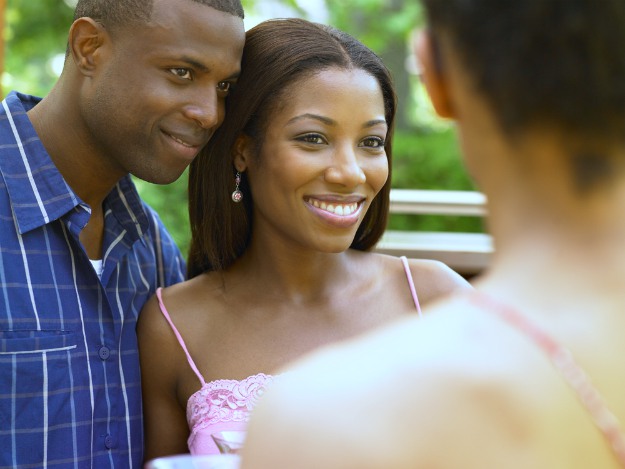 Sometimes, what he is trying to tell you is that he IS actually dating other people and there’s not much you can say because you guys aren’t committed, re: “just friends.” This means you can’t question him about what he does because friends don’t get to question friends.

4. I Don’t Want to be Rushed Into Anything

Sometimes, a man will make it clear that y’all are just friends because he doesn’t want to feel like he is being prematurely rushed into the commitment. Men know that with commitment comes expectations and sometimes, he isn’t ready to fulfill those expectations.

If he’s exhibiting commitment-phobe traits, then you should make your expectations clear with him. Communicate early and often around where the relationship needs to progress. You shouldn’t be years and many months still being a friend when you really want to be a lover in a committed relationship.

READ: 4 Telltale Signs That a Man Is Serious About You

The harsh truth is that, sometimes, he just really isn’t that into you but likes having you around as an option or convenience. Maybe he just wants you to be the girl he can call to hang out with when he is bored or to have sex with when he wants it. He might be into you enough to give you the leftovers of his time or to fill some space, but he doesn’t want to let you out of that friend-zone where you start expecting more.

When a man wants a woman and is truly pursuing her, then he has no issue making it clear and taking himself out of that friend-zone. He will naturally want to claim his woman and she won’t have to play the guessing game. Just remember that when it’s right, it’s easy!

Besides, you can’t build a committed relationship with someone who only wants to be “friends.” When it’s all said and done, if you value your time, then you will seek clarity and you will understand that you have a say so in the situation. You don’t have to torture yourself with trying to look for ways on how to help someone with the fear of commitment. Be clear through your words and your actions as they must align…and so should his.

If you do feel strongly for this man, commitment issues or not, you can still show him how much you care for him. This book on what you can do for your man When a Woman Loves a Man: Pursuing His Heart, may just help him see you in a new light.

BMWK – What do you think a man means when he says he just wants to be friends? Have you experienced this situation? Share how you handled it in the comments section below!

Up Next: 10 Reasons You’re Trying To Run From A Good Woman

Editor’s Note – This post was originally published on Mar. 15, 2017, and has been updated for quality and relevancy.

Troy Spry a Certified Life, Dating, and Relationship Coach and the one and only "Reality Expert", resides in Charlotte, NC. He created his blog, Xklusive Thoughts, with the intent of putting out a very realistic perspective and using it as a vehicle for inspiration! He hopes to challenge people to think differently and inspire people to do and be better in relationships and in life!